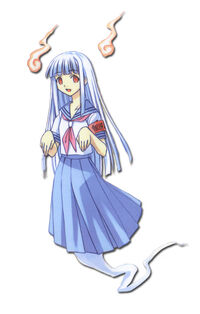 Yūrei (幽霊) are spirits of the dead in Japan who have been kept from a peaceful afterlife for various reasons and are now cursed to haunt the living.

According to Japanese belief, when a person dies their soul passes on to a heavenly afterlife, which is accomplished through a number of funeral and post-funeral rites and prayers performed by their loved ones over many years. Through these rites, the soul is reunited with its ancestors and becomes a family guardian spirit which are enshrined in the house and continue to be honored as members of the family.
Souls that do not receive the proper funeral rites cannot pass on. In addition, those who die suddenly, tragically, violently, or with a grudge and malice in their hearts are sometimes also unable to pass on even with the proper prayers and rites. These souls remain stuck within the realm of the living and are considered "Yūrei".

As restless spirits, Yūrei are stuck in the realm of the living until someone can put them to "rest". Until then, they tend to haunt a particular place or person that has meaning to them (eg. the place where they died or are buried, their killer, or their loved ones).

There are many different types of Yūrei, whose appearances and behaviors differ depending on the circumstances surrounding their deaths. In most cases, though, Yūrei appear much like they did in life, retaining the features and the clothing they wore when they died or were buried. As a type of spirit, they generally appear translucent and even then are only very faintly visible, so much so that they appear to have no feet.

Retrieved from "https://negima.fandom.com/wiki/Yurei?oldid=17640"
Community content is available under CC-BY-SA unless otherwise noted.