In order to allow Sayo Aisaka to leave Mahora and accompany Ala Alba to Wales, Kazumi Asakura purchased a special doll that the ghost girl could possess. Once inside, Sayo can move the doll like a robot and interact with the living world, though at first, she is unused to walking again after having no feet for over 60 years. With Evangeline's assistance, Asakura had bought the item from Osorezan and to Sayo's horror, the doll has a straw voodoo figure inside of it, (most likely the source of its power). As a test run before the Wales trip, Asakura brought the Sayo-possessed doll with her when Negi and his crew took a trip to the beach. 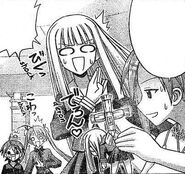 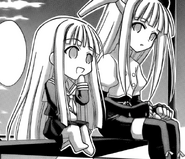 Add a photo to this gallery
Retrieved from "https://negima.fandom.com/wiki/Sayo-Chan_Doll?oldid=14021"
Community content is available under CC-BY-SA unless otherwise noted.