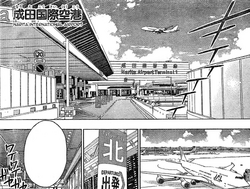 Narita handles the majority of international passenger traffic to and from Japan, and is also a major connecting point for air traffic between Asia and the Americas. The airport is the second-busiest passenger airport in Japan, the busiest air freight hub in Japan, and ninth-busiest air freight hub in the world. It serves as the main international hub of Japan's flag carrier Japan Airlines, All Nippon Airways, Nippon Cargo Airlines, and also low-cost carriers Jetstar Japan and AirAsia Japan. Under Japanese law, it is classified as a first class airport.

Retrieved from "https://negima.fandom.com/wiki/Narita_International_Airport?oldid=17143"
Community content is available under CC-BY-SA unless otherwise noted.