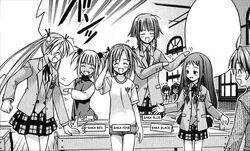 The group consists of Asuna Kagurazaka (Baka Red), Yue Ayase (Baka Black), Ku Fei (Baka Yellow), Makie Sasaki (Baka Pink), and Kaede Nagase (Baka Blue). The girls voted amongst themselves which colour each one received with Asuna receiving red (group leader) due to her always gaining the lowest grades of the group.

In an attempt to getting passing grades for the coming exams, the Baka Rangers and Negi entered the Library Island in search of a magical book that is said to make the reader smarter.

In the Live-action Series, they are oficially called Mahora Sentai Baka Rangers (まほら戦隊バカレンジャー) with Asuna as their leader (as opposed to the anime, where Yui was the leader) for having the lowest score amongst them. 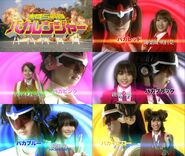 Retrieved from "https://negima.fandom.com/wiki/Mighty_Morphin_Baka_Rangers?oldid=20940"
Community content is available under CC-BY-SA unless otherwise noted.