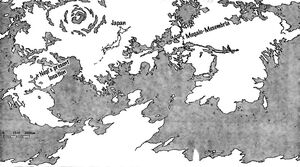 The Magic World (aka Mundus Magicus) is a magical realm where magic is extremely abundant and well known by all its inhabitants, and all of its technology seems to be powered by magic. Mundus Magicus is full of mythical creatures that seem to take the place of regular animals and most of its population is compose of human like hybrids. It is later revealed that Mundus Magicus is an unstable alternate world based on the planet Mars that was created by the Mage of the Beginning.

Slavery is shown to be common practice in the Magic World, the main symbol for this are slave collars.

The main currency used in the Mundus Magicus is called Drachma, it is apparently used by all major countries and is in the form of coins.

The dominant and largest country of the south. It is composed mostly of Demi-humans. It is governed by a royal monarchy.

The newest and most dominant country of the north. It is composed mostly of full-blooded humans who are the descendents of 50 million migrants from earth. It is ruled by a Senate and currently has a population of 67 million.

While technology in Mundus Magicus is rare compared to the Old World, it is more advanced than anything seen in the Old World.

Mundus Magicus has many creatures living on it including the humans; however, the most notable are the demi-humans who are Mundus Magicus' native inhabitants. Demi-humans are magical creatures based on various lifeforms, including mythical ones like dragons and non-animal ones like trees. This gives them a set of natural abilities besides magic that can be used for combat. The demi-humans have the ability to transform into less human forms that can boost their strength and magical abilities depending of what lifeform they are based on.

Retrieved from "https://negima.fandom.com/wiki/Magic_World?oldid=21089"
Community content is available under CC-BY-SA unless otherwise noted.