Mage of the Beginning

Mage of the Beginning (Also known as the Life-Maker) is a central character in Negima! and the actual main antagonist of the series. She is the mastermind behind the Cosmo Entelecheia and has existed for several millennia. The Averruncus are her special creations serving her without question, with the obvious exception of Tertium.

The Mage of the Beginning is first seen during flashbacks of the Great Mage War displaying the final battle during which she was seemingly destroyed. Later as Fate Averruncus and the remnants of Cosmo Entelecheia try to repeat what happened twenty years ago, they are thwarted by Negi Springfield and his team, the Ala Alba. As Fate and Negi are fighting, Fate starts to experience flashbacks of his birth and his first years of duties, back when the Mage of the Beginning was using Filius Zect as a vessel.

After Fate admits defeat and agrees to help Negi in his alternate plan to save the Mundus Magicus, they are both pierced by a dark beam, just like Primum and Nagi before them, and the Life-Maker’s ominous figure appears. Apparently, with both worlds merging and with Cosmo Entelecheia's hideout (with Asuna's captive) appearing over her prison enabled the Mage to awake, and she created a projection of herself onto the battlefield. The Life-Maker restores every fallen members of Fate's (former) team and resurrects all her deceased followers, who then prepare to finish off the Ala Alba, starting with Negi and Fate.

As everything seems doomed, Evangeline A.K. McDowell (who has become Negi's teacher) uses the connection between Mahora Academy and the Mundus Magicus to barge in, soon followed by the Dean of Mahora and every surviving member of the Ala Rubra. Evangeline encases them all in everlasting ice with a powerful spell she especially devised for such enemies, but it has no effect on the Life-Maker who enters the fray.

She paralyzes Evangeline and Rakan, swats away the Ala Rubra like nothing and grabs Negi by the neck. Asuna, who has just been freed by all of Negi's comrades, jumps to the rescue and slices the archmage's projection nearly in half with her Pactio Artifact, a huge, demon-banishing Claymore sword. Negi and Asuna then combine their White of Mars power into the Claymore, dispelling her onslaught of dark beams and destroying her projection.

As the Life-Maker's projection is fading away, it is revealed that she is now using Nagi Springfield himself as her vessel. Nagi briefly regains consciousness and asks his son to come and kill him. Surprisingly, Negi, who spent his entire life yearning to find his father, seems to take the news rather well, and Asuna use the primal Code of the Life-Maker to restore the Mundus Magicus.

Beyond being a powerful and ancient archmage, the Mage of the Beginning's perhaps most potent ability is that of The Resonance[1]. As explained in UQ Holder, this is the power of infinite empathy. Essentially, it allows and forces the wielder to feel the emotions of everyone and everything. This is said to be so powerful as to reduce those with the ability to madness in a short time.

This is particularly important when combined with the Mage of the Beginning's other ability, a revenge type mental possession. When killed by anyone, they are then possessed, thus explaining his subsequent control of Nagi Springfield and Filius Zect. This is essentially a form of essence transfer, but interestingly enough the victim is not immediately taken over. Instead, they will have a time when they retain control of themselves. This will not last though as they will inevitably have the Resonance awakened within them, resulting in the loss of mental resistance and thus allowing the Life-Maker to take over completely[1]. Although not explicitly stated, it is also likely that some element of the possessed individual remains even after the Mage of the Beginning has become dominant. Due to this, the original gender of the Mage of the Beginning has not been firmly established, although for the Negima! and it's sequel UQ Holder the host bodies are biologically male.

The Life-Maker is also the known creator of Mundus Magicus, The Magical World, and all of its native inhabitants. She is also said to be the person who changed the Dark Evangel into what she is today. 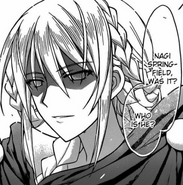 Appearances in other media

The Mage of the Beginning make a cameo appearance in beginning of the movie.

In the sequel to Negima!, the Mage of the Beginning is mentioned by Nagumo, saying she was still active on the year 2065. She is shown with the appearance of her first host intercepting a delayed communication spell by Negi on her Signiture and is shown as pleased when she sees Touta[2]. Further mentions appear to indicate that the Mage of the Beginning was originally female[3], but this could just be indication of the oldest form they are aware of.

During a dream walk with Touta, the Mage of the Beginning reveals that their original name was Ialda Baoth.

In the flashback of alternate timeline at Chapter 138, it's showed that Mage of the Beginning is still hosting Nagi's body, but later was defeated by Negi and Asuna.

Community content is available under CC-BY-SA unless otherwise noted.