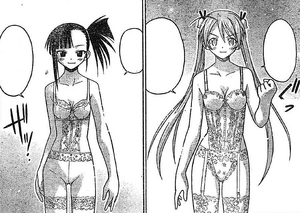 The concept of lingerie was developed during the late nineteenth century where Lady Duff-Gordon of Lucile was a pioneer in developing lingerie that freed women from the then more restrictive corsets. Before the invention of crinoline, women's underwear was often very large and bulky. During the late 19th century, corsets became smaller, less bulky and constricting, and were gradually supplanted by the brassiere, first patented in the 20th century by Mary Phelps Jacob. When the First World War broke out, women found themselves filling in men's work roles, creating a demand for more practical undergarments. Manufacturers began to use lighter and more breathable fabrics.

As the 20th century progressed, underwear became smaller and more form fitting. In the 1960s, lingerie manufacturers such as Frederick's of Hollywood begin to glamorize lingerie. The lingerie industry expanded in the 21st century. The boutique Faire Frou Frou categorized lingerie as an accessory with details such as straps and lace trim resulting in their modern appearance.

Retrieved from "https://negima.fandom.com/wiki/Lingerie?oldid=18870"
Community content is available under CC-BY-SA unless otherwise noted.