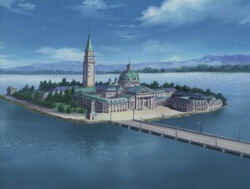 Library Island is an island library complex that resides at the center of Lake Mahora at the Mahora Academy.

Established at the same time as the academy during the Meiji era of Japan, during World War II rare and important books from around the world were placed within the island for safe keeping. As the collection grew, plans were re-drawn for expansion underground, resulting in the island facility becoming the largest library in the world. As no living person as full knowledge of the library's layout in present day, the Mahora Academy inaugurated the Mahora Academy Library Expedition Club as a joint project between the middle school, senior school and university to explore and redocument the library and its layout.

Amongst the rare and legendary books store within is the Book of Merkisedek. Beneath the library and library basement levels is the Deep Library; an underground area lit by a gentle light and overflowing with valuable items. The deep library is a paradise for book lovers.

Library Island is based on the Island of St George in Venice, Italy.

Retrieved from "https://negima.fandom.com/wiki/Library_Island?oldid=17584"
Community content is available under CC-BY-SA unless otherwise noted.