She was one of the first girls in the class to learn Negi's secret, which she discovered accidentally in Kyoto while investigating the rumor that someone had proclaimed her love to Negi. Though initially she intended to reveal Negi's secret to the world, she was persuaded to keep quiet about it, and is occasionally seen plotting with Chamo. She had been promised a Probationary Contract in exchange for keeping the secret, and got one during the trip to the magical world. She frequently elects herself as Negi's manager when it comes to scheduling time with him, (even though Chamo is actually the one pulling the strings). Both she and Chamo were the instigators of the "Kiss Negi" game during the Kyoto field trip. Asakura sports the fourth largest breasts in the class. She signed on with Chao's plan, acting as the lead announcer and referee at the Mahora Fighting Tournament, where she often deliberately pointed out the more fantastic feats performed by her teacher and classmates, drawing the attention of the audience towards them. However, she later reveals she had completed her contract with Chao and helps Negi to stop Chao's plan to reveal magic. She became the announcer for the "Mars Attacks vs. Mage Order" game. Sayo is currently following (or haunting) Kazumi. She is friends with Sayo and is one of the few people who can see her, having sat next to her for so long, and having been the first person to come into contact with her. She later obtains a doll from Evangeline for Sayo to possess, so that she can leave the school grounds. In Negima Workshop, she is noted to be similar to Mitsune Konno from Love Hina. 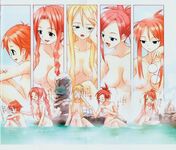 Retrieved from "https://negima.fandom.com/wiki/Kazumi_Asakura?oldid=13694"
Community content is available under CC-BY-SA unless otherwise noted.