The Great Paru-Sama is a goldfish-type airfish owned and operated by Haruna Saotome upon Ala Alba's arrival in the Magic World. Following the group's reunion at New Ostia, the ship became the group's mobile base of operations and primary mode of transportation.

Bought second-hand for 150,000 drachma, the airfish is equipped with a high output, 18 prayer spirit pentagram engine with forward and reverse thrusters. The ship's interior is equipped with a toilet, bath and shower as well as a fully featured kitchen, bedding, cargo bay, upper deck and a spacious common room. The ship's cockpit is located at the front of the ship, with windows doubling as the eyes of the ship's goldfish paint design. The tail of the airfish possesses the "white wing" symbol of the Ala Alba group.

The airfish is also equipped with various black market anti-pirate weapons such as twin anti-demon lightning cannons on each wing, a forward-mounted mana cannon, twin demolition torpedo launchers and a mini-gun turret created by Haruna herself that extends from the ship's upper deck.
The gun turret, dubbed the "Sagitta Magica Mini Gun", runs on a Sagitta Magica scroll and has to be operated manually by a gunner (usually Sayo Aisaka) standing on the ship's deck. The ship also possesses an anti-magic field that acts as a shield against magic-based attacks and possesses three anchors that can be used to secure the ship to a surface if required. 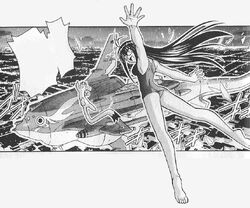 After being stranded in the Hellas Empire, Haruna exploited her knowledge of manga and anime, and the absence of such things in the Magic World, to create the kingdom's first doujinshi. The popularity of her works, particularly her Boys Love manga, quickly made her wealthy and she sought to buy an airfish of her own to use as transportation.

After being reunited with Chachamaru Karakuri and Kazumi Asakura, who were dispatched by Negi Springfield to locate the remaining members of Ala Alba, Haruna also gathered Kamo and Ku Fei before arriving at New Ostia onboard the Great Paru-Sama.

Following this, the ship alternated between being birthed at one of the city's docking ports to act as a meeting and rest point for Ala Alba members, floating amongst the rocks in the region while the likes of Negi and Kotarou Inugami trained for the gladiator matches, and assisting in remapping the ruins of Old Ostia in the group's search for the city's old Portal Gate.

Following an attack by Cosmo Entelecheia at the Governor's Ball, the Great Paru-Sama assisted in the escape of Haruna, Sayo, Kamo and Chachamaru from Ostian forces before being caught in between the military fleet and their battle against Entelecheia's summoned titans.
Following this, the Great Paru-Sama, paired with the Fly Manta Johnny, enacted an aggressive infiltration of Entelecheia's base at the Gravekeeper's Palace to rescue the remaining members of Ala Alba and stop Fate Averruncus from enacting a ritual to end the Magic World and send its magical inhabitants to a "heaven" realm for which the group, Cosmo Entelecheia, was named after.
While initially intended to remain at a distance to act as an escape route and scout, both Manta Johnny and the Great Paru-Sama were forced to crash-land within the palace to avoid destruction. However, following the awakening of Quartum, both airfish came under attack and Manta Johnny was destroyed while intercepting an attack meant for the Great Paru-Sama.

Eventually saved by Negi, the damaged ship is sucked into a portal connecting the palace with the World Tree, created during the apex of Fate's ritual, and crash lands in Mahora City on Earth.

The airfish was later rebuilt and returned to service as Haruna's personal transport after she moved to live in Megalomesembria and continue her career as a mangaka in the Magic World.

Retrieved from "https://negima.fandom.com/wiki/Great_Paru-Sama?oldid=18425"
Community content is available under CC-BY-SA unless otherwise noted.