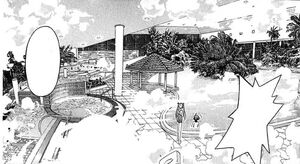 The Dormitory Bathhouse is a large Japanese-style bath house attached to the Mahora Academy Student Dormitory.

Free to students of Mahora Academy, the bath house contains many modern facilities, with Japanese-style shower stations, spas and a large central pool. While the facilities are separated between male and female areas, elementary school students, or students of similar age, seem to be exempt from this rule and are free to bath in whichever section they choose.

In UQ Holder!, after learning of the bathhouse from Santa Sasaki, Touta Konoe leads Karin Yuuki, Kuroumaru Tokisaka, Ikkuu Ameya and Kirie Sakurame to try it out.

Retrieved from "https://negima.fandom.com/wiki/Dormitory_Bathhouse?oldid=17635"
Community content is available under CC-BY-SA unless otherwise noted.