Firstly: A large number of "Master Keys". These are the simplest applications, designed for use in combat. They are still sufficient to defeat any resident of the magical world.

Secondly: There are 7 "Grand Master Keys", with the ability to manipulate the creator´s power at a more advanced level. Those type are mostly wield by the members of Cosmo Entelecheia, like Dynamis and Fate.

Finally: There is a single "Great Grand Master Key". In theory, it can wield a level of power equal to that of the creator himself. Its quite literally the final key to the Magical World. 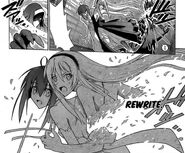 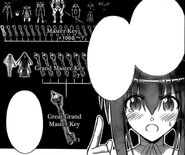 Retrieved from "https://negima.fandom.com/wiki/Code_of_the_Lifemaker?oldid=16880"
Community content is available under CC-BY-SA unless otherwise noted.