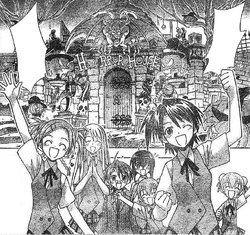 The Class 3-A Haunted House is a class exhibit that Class 3-A set up and ran during the Mahora Academy School Festival.

Held within the 3-A classroom, the haunted house is aided by one of Chao Lingshen's inventions that creates a dimensional paradox space within the constructed house; making it larger on the inside than it is on the outside. The house's tricks are further aided by Sayo Aisaka, who is in fact a real ghost.

After recordings were released of the Mahora Martial Arts Tournament on the festival's second day, the class went to watch Negi's final tournament fights while Zazie Rainyday volunteered to stay and run the haunted house with real ghosts and demons.

Retrieved from "https://negima.fandom.com/wiki/Class_3-A_Haunted_House?oldid=20879"
Community content is available under CC-BY-SA unless otherwise noted.