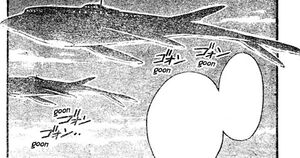 An Airfish is a type of airship so named for being physically based on the appearance of sea creatures. Airfish are a common mode of aerial transportation in the Magic World on Mars.

Retrieved from "https://negima.fandom.com/wiki/Airfish?oldid=17842"
Community content is available under CC-BY-SA unless otherwise noted.